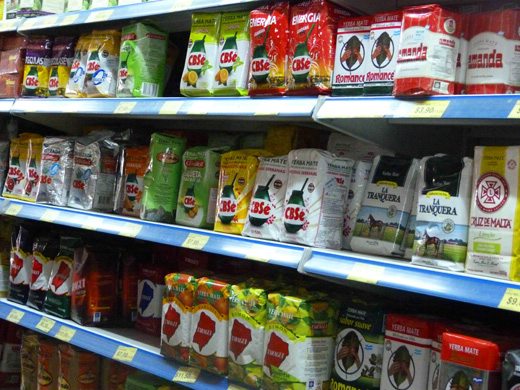 Akin to a breakfast cereals, the yerba mate aisle in an Argentine supermarket stretches the entire length and comes in myriad different brands, qualities, flavors, and sizes, from 1 kilo bags to individually wrapped tea bags

One of the most enjoyable aspects of travel is trying new things: new foods, new drinks, new words, new customs. Of course, some new things are safer than others – street food and peeled exotic fruits can produce unfortunate consequences, although travelers with steely stomachs will still take calculated risks.

In the spirit of culinary adventure of the liquid variety, for the month of March, the LAFL travel blog will feature the national drinks of various Latin American countries. From hot drinks to cold drinks to all forms of alcoholic concoctions, we will be covering the drinks you’re likely to find on a Latin American vacation, the types of drink you’ll run into whether you’re at a high-end restaurant, a street-corner cafe, or the hippest nightclub in town.

We begin in Argentina, where Malbec, Fernet, and yerba mate are regarded as proud national emblems.

Malbec and Other Wines

In a country that boasts a love affair with red meat, it is entirely fitting that wine is, by presidential decree, Argentina’s “bebida nacional” (national drink). On an international scale, Argentine wines have rocketed to prominence because of their high quality and great value. Wherever you go in Argentina, wine is the companion par excellence to any meal whether you travel to Buenos Aires, Mendoza, Salta, or the furthest reaches of Patagonia.

Enjoy Argentina’s official “national drink” on a wine tour to Mendoza or Salta.

Malbec is the superstar of Argentine wines. Fruity and balanced, with a velvety texture, this dark red wine is known for being very accessible. For tours of vineyards and wineries in Argentina, Mendoza is the place to go. While the city of Mendoza is a great base for dining, nightlife, and sightseeing, the surrounding communities of Chacras de Coria, Luján de Cuyo, and the Uco Valley will appeal to travelers seeking a quieter, more romantic getaway.

The tranquil boutique wine atmosphere is even more pronounced in Argentina’s north. The region around Salta and the Calchaqui Valleys is recognized for the production of Torrontés. Aromatic and citrusy, this smooth, full bodied white wine is also making a splash on the international scene. You can buy Torrontés abroad, but there’s nothing quite like traveling to the high altitude vineyards of Cafayate or Cachi to sample the local vintage.

Fernet has its origins in Italy, where it was first brewed as a tonic for “gas pains,” fatigue, and other maladies. In the post-WWII period, Italian immigrants brought the pungent, dark-hued elixir with them to Buenos Aires, where many years later, their descendants began mixing it with cola to create one of the most enduringly popular cocktails in Argentina. Behind Italy, Argentina is the largest consumer of Fernet.

The aromatic liqueur Fernet, mixed with cola and served over ice, is one of Argentina’s most popular refreshments.

The bitter and somewhat pungent liqueur is a blend of 40 herbs, spices, barks, roots, and fungi. Saffron is the most overpowering among these ingredients and accounts for the distinctive bitterness of Fernet, often perceived as an exceedingly minty, mouthwash flavor.

Today, Argentines drink Fernet in a shot glass, on the rocks, or mixed with coffee, espresso, soda, mineral water, or soft drinks. Some Argentines continue to consume Fernet for its medicinal qualities, specifically as a cure for excesses of food and drink (this without irony).

Fernet is enjoying a boon of popularity in the U.S., where the revival of vintage cocktails has made it the darling of mixologists in bars across the nation, earning profiles in magazines such as The Atlantic.

With just as much enthusiasm, Argentina drinks yerba mate. Usually prepared in a small, dried out gourd and sipped through a metal straw, the base of this hot brew is the ground leaf of the Ilex paraguariensis tree, a species of holly. Once brewed, yerba mate has a smoky, bitter, and woody flavor. The drink is sometimes sweetened with sugar or honey. Flavored varieties (peach, orange, etc) are also produced.

Since the time of the gauchos, the drinking of mate (pronounced mah-tay) has been deeply entwined with Argentine national identity and today is a widespread social custom. In parks, plazas, and other public places, it’s common to see groups of friends gathered round a thermos of hot water and a small gourd which is passed from person to person. (The same is true in Chile, Uruguay, Paraguay, and southernmost Brazil, where the incidence of mate drinking rivals that of Argentina.)

The travel experts at Latin America For Less can help you organize a vacation to Buenos Aires and other top Argentina destinations, where you can sample the best of this captivating country.