Each of Patagonia's seasons has something magical to offer intrepid travelers. Plan the best time to visit Patagonia with our Patagonia weather guide below. 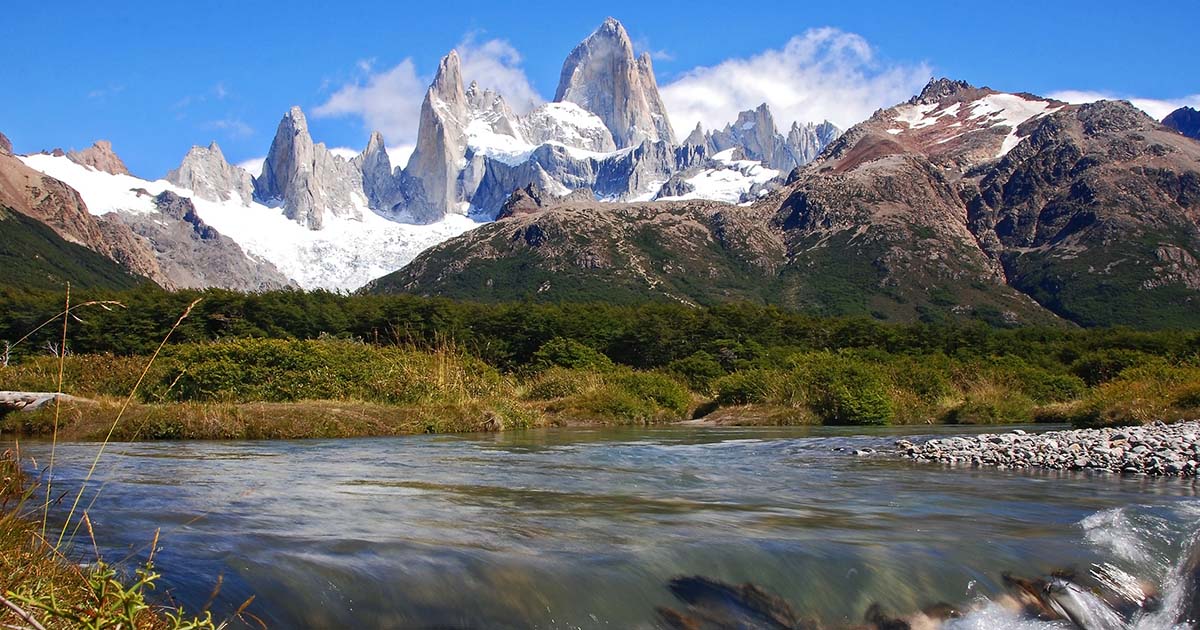 Mount Fitz Roy towers over Los Glaciares National Park. It's one of the most popular treks in the area.

Many consider the summer from December to February the best time to visit Patagonia. But there’s so much more to think about when planning a trip. Although summer is definitely best for hiking, the other seasons also have their benefits. For example, snow sports or cheap prices. Below is everything you need to know about each region’s weather to help you decide when to visit Patagonia.

Patagonia is a vast region that occupies the southern halves of both Chile and Argentina. Its landscape comprises the Andes, vast forests, lakes, glaciers and remote villages. Overall, the climate throughout Patagonia is generally chilly and dry.

However, considering its range, you can expect variation from region to region. Warm and cold ocean currents also have big impacts. Generally, because of these currents, the east side of Patagonia is warmer than the west.
Of course, mountain weather not only varies from season to season but also day to day and even hour to hour. The weather in Patagonia is no exception. Even if you are traveling in the middle of the summer, you should prepare for anything — sun, rain and even snow!

Learn more about the climates of Patagonia’s main regions below.

The Lakes District sits at the top of Patagonia, for the most part on the Chilean side. You can enter this region through the Chilean town Puerto Montt or Argentina’s Bariloche.

As its name suggests, a multitude of lakes punctuates the lush landscape. The surrounding woodlands have a temperate rainforest climate. As a result, it’s rainier here than in the rest of Patagonia. Winters have the most rainfall, ranging from 4.4-5.3 inches (112-135 millimeters) per month. Meanwhile, summer only sees about 1.2-3.0 inches (31-76 millimeters) per month.

On Argentina’s coast is the Valdes Peninsula, a hammerhead shaped headland. Popular for its wildlife, UNESCO name this nature reserve a World Heritage Site in 1999. The largest town there is Puerto Madryn.

UNESCO named the Valdes Peninsula a World Heritage site for its unique wildlife. Here a Magellanic penguin looks out over the bright blue ocean.

In contrast to the Lakes District, Valdes Peninsula’s climate is semi-arid. Average rainfall ranges from 0.5-1.0 inch (13-25 millimeters) throughout the year. However, it experiences similar temperatures to the Lakes District. Summers reach highs in the mid-60s (18-19º Celsius) during the day and drop to the mid-50s (12-13º Celsius) at night. And winter temperatures average from the mid-40s (7-8º Celsius) during the day and high 30s (3-4º Celsius) at night.

The north of the park is popular with trekkers looking to scale Mount Fitz Roy and Cerro Torre. Meanwhile, in the south, visitors head to Lake Argentino and Perito Moreno Glacier. Afterwards, tourists enjoy the Patagonia scenery from hotels in town.

Perito Moreno Glacier stands at the edge of an offshoot of Lake Argentino.

Since this area is home to giant sheets of ice, you can expect the weather here to be cold and humid. Summertime temperatures are like the Lakes District. However, winters are much colder and often snowy. Winter nights in El Calafate will drop to freezing temperatures. This allows locals and visitors alike to ice skate on the adjacent Lake Argentino.

Even in summer, those summiting Fitz Roy or trekking across glaciers should bundle up. During the winter these treks are completely closed.

The average yearly rainfall on the western side of the park is 20 inches (508 millimeters). Meanwhile, the eastern side is 35 inches (889 millimeters). However, there is no season in particular that is rainier than others.

Torres del Paine National Park is right below Los Glaciares but on the Chilean side of Patagonia. Torres del Paine is the best Patagonia destination for hikers. Coming from Puerto Natales, avid trekkers will plod along the popular W or O trails. Even with a less rugged experience, you can appreciate the granite “towers” that give the park its name.

The “towers of Paine” sit at the edge of Torres del Paine National Park near the border with Argentina.

Because of the chilly Humboldt Current, the weather in Torres del Paine is the coldest in Patagonia. Summer temperatures rarely pass 60º Fahrenheit (16º Celsius) during the day. Then they drop to the mid-40s (7-8º Celsius) at night. Meanwhile, the winter sees highs of no more than 40º Fahrenheit (5º Celsius) and lows around freezing.

This part of Patagonia also has rainy and dry seasons. Fall (March–April) is the rainiest, with a monthly average rainfall of 3.2 inches (80 millimeters). Conversely, winter and early spring from July to October only get half that amount per month.

This region of Patagonia has a subpolar climate affected by nearby oceanic currents. As a result, the western side is rainier than the eastern, with 118 inches (2,997 millimeters) of rainfall per year. However, the entire region is quite humid. Summers are 70 percent humidity and at the peak of winter almost 90 percent.

Tierra del Fuego is a rugged wilderness at the end of the world.

Summers are generally short-lived in the region. Although summer has more rain, winters are long and damp. Albeit with pretty mild temperatures. Highs in summer only reach the mid to high-50s (14-15º Celsius) during the day and drop to the low 40s (4-6º Celsius) at night. Whereas winter temperatures don’t surpass the high 30s (3-4º Celsius). At night, they settle just below freezing.

The Best Time to Visit Patagonia

The best time to visit Patagonia is in the summer from December to February. The warm, mostly sunny weather means the vast majority of activities are available. These include hiking, glacier trekking, horseback riding and river rafting.

However, this doesn’t give you the full picture. The other three seasons also have their perks. Although summer is the peak tourist season, spring and fall also have decent weather and much fewer people. Winter, of course, is the only time you can go skiing and snowboarding.

Below we break down the pros and cons of each season in Patagonia.

Summer is the best time to hike Patagonia. It’s the warmest time of year, yet it’s never too hot — rarely passing the high 60s (19-20º Celsius). This is also the best time to head down to “the End of the World,” or Ushuaia, and Tierra del Fuego to enjoy long and balmy days.

Thrill-seekers looking for glacier treks or Antarctica cruises should travel in summer. Or at least late spring or early fall. Not surprisingly, any other time of year will be too cold.

Given how perfect the weather is, it’s no wonder why Patagonia summer is the peak season for tourists. Outdoorsy travelers head to southern Chile and Argentina to escape winter back home. Although you’ll cross paths with a lot of people in town, there is still plenty of space on the trails. However, because of all the visitors, you have a slim chance of spotting Patagonia wildlife. Prices are also hiked up for accommodations and Patagonia tours.

Fall: March, April and May

Much like the northern US, Patagonian has beautiful fall foliage from March to May. Temperatures are a bit cooler throughout the region. But it’s still reasonable weather for hiking so long as you pack some extra layers. Also, remember that this is the rainy season in Torres del Paine, so don’t forget to pack your rain jacket!

Fall in Patagonia brings colorful foliage and snowfall on its granite peaks.

Because the weather isn’t as ideal as in the summer, you can enjoy hiking trails with fewer tourists around. Also, the further into the off-season you get, the better prices you will have for hotels and tours. The only exception may be during Holy Week, or Semana Santa, when many locals will be on vacation, too.

Many also consider fall to be the best time to visit Argentina and Chile beyond Patagonia. Farther north around Santiago and Buenos Aires, fall has wonderful temperate weather.  Perfect for exploring all day long!

A right whale breaches off the coast of the Valdes Peninsula.

When Patagonia winter rolls in, you can expect cold temperatures and plenty of snow. Because of the frosty weather, you’ll want to avoid most of southern Patagonia. Unexpected snowstorms can also cause travel delays. Prepare to be flexible if you are traveling to Patagonia this time of year.

While trekking isn’t available, it’s definitely the perfect time for skiing. Being the low tourist season, you will have this winter wonderland all to yourself! Popular ski towns include Bariloche and El Calafate and El Chaltén.

Surprisingly, another benefit is the uptick in animal sightings. Cold temperatures mean that mountaintop dwelling animals, like pumas, head to warmer valleys. There are also fewer tourists to scare the animals away. Moreover, winter is the best time of year to spot right whales off the coast of the Valdes Peninsula.

Much like fall, spring in Patagonia is a great shoulder season for travel. Trees sprout new leaves and flowers bloom, creating a beautiful landscape for photographers. The weather is still cool but definitely tolerable for hiking and other activities.

You can spot guanacos, a wild cousin to llamas, throughout Patagonia.

This is also the best time to visit Patagonia to spot wildlife. Many species will be out and about after the chilly winter and before all the tourists come for summer. For example, you can spot guanacos, foxes and armadillos. There are also pods of whales cruising along the Atlantic coast.

Since it’s before the high season, prices are still low for hotels and tours. Spring is not only a great time for visiting Patagonia but other regions of Chile and Argentina, too. Like the fall, travelers enjoy fewer crowds and mild weather while exploring the cities.

Spring in Patagonia brings back lush green foliage to the trees as the snow melts from the high mountain peaks.

Despite different weather patterns, each season in Patagonia has something to offer. When planning a trip to this remote destination, consider what experiences you want to include. For example, do you want sunny summer hiking, fall foliage, fresh snow for skiing or spring discounts? Once you decide on activities, it’s easy to pick the best time to visit Patagonia for your trip!

Ready to explore the wilds of Patagonia? Contact our team of expert Travel Advisors to plan your dream Patagonia vacation.

A love of foreign languages brought Rachel diving headfirst into that expat life. She has spent the last few years living in Peru, exploring both touristy and off-the-beaten-path destinations throughout the country. Some of her favorite things to do in Peru are hiking, visiting museums, and trying veggie-friendly versions of typical Peruvian dishes.

Tierra del Fuego National Park is the perfect destination for outdoorsy travelers. Learn about Tierra del Fuego tours and weather, getting there, where to stay in Ushuaia and more.

END_OF_DOCUMENT_TOKEN_TO_BE_REPLACED

A brief look at the diving delights of Argentina’s Puerto Madryn. Going underwater in Patagonia.