There are many reasons to travel to Brazil for Carnival and NOT go to Rio de Janeiro, host to the most popular celebration. 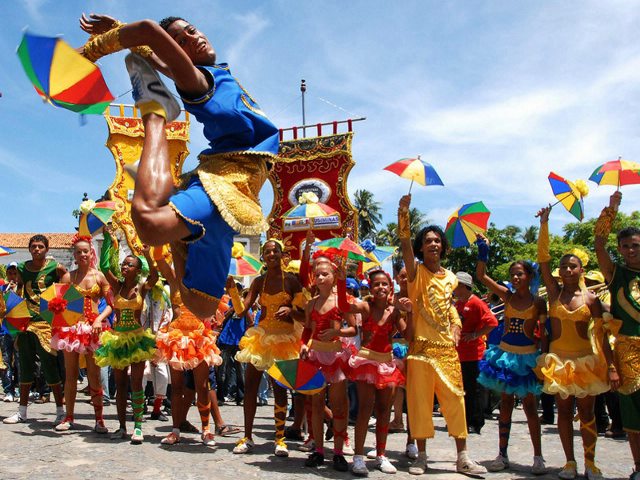 There are many reasons to travel to Brazil for Carnival and NOT go to Rio de Janeiro, host to the most popular celebration. In Rio, prices for hotels and other amenities soar sky-high, and for some, the cost of travel to Rio during this peak holiday season can become prohibitive. Others may decide to book last minute and find that they are out of luck in terms of flights and places to stay. (Note that this problem will only worsen as the dates for Carnival approach.) Other travelers may simply be looking to see a different style of Carnival. In any case, Brazil offers plenty of choices for Carnival travel beyond Rio.

Today, we look at Carnival in Salvador de Bahia and Recife, both of which are excellent destinations for Brazil travel for Carnival and around the year. All of Brazil celebrates Carnival, and while the festivities from place to place are all equally euphoric, they diverge in their specific traditions and influences.

Carnival groups are called blocos and can include up to 6000 members. The most popular are blocos afros, afoxés, samba, percussion, and trio elétricos, and together fill kilometers of Salvador’s streets with revelry.

Bahia-style Carnival is more participatory and more musically varied than Rio. The latter is reflected in two Carnival innovations that had their birthplace in Salvador de Bahia and spread to the rest of Brazil, namely the trio elétrico and the guitarra baiana.

Osmar Macedo also co-invented the guitarra baiana (Bahian guitar, also known as the pau electrica, electric log, or electric mandolin). Its use was at first limited to Bahian Carnival, but has since spread to become a popular instrument across Brazil and in many musical styles. Osmar’s son Armandinho is considered a master of this guitar. (Check out a video of Armandinho performing “Brasileirinho” during Bahia’s Carnival).

African Bahia is well-represented in Salvador’s Carnival. African influences are evident in dances, costumes, and rhythms.

Unlike Rio’s samba parades, which are limited to the Sambadromo, Salvador’s main Carnival party is comprised of kilometers-long circuits that take over designated city streets. People are organized into blocos, each of which chooses a specific style of music. The dancing members if blocos can number into the thousands. Carnival in Bahia is not so much a spectator event as it is one that demands foot-stomping, hip-swinging participation. Barracas, street corner stations equipped with sound systems where crowds gather to drink and dance and praças (squares) also become gathering points to play and dance to music in various Brazilian styles, including classic Carnival songs.


Unique musical rhythms are also a key distinguishing feature of Carnival celebrations in Recife & Olinda, considered one of the most fun festivities in Brazil because of its intense participatory nature – which exceeds even that of Salvador.

The lively and enticing sounds of frevo and maracuta transform Carnival onlookers into a vivacious crowd. Frevo is a working-class variation of the Portuguese word for fervor, and describes a frenetic beat that reflects African influences. Dancers of frevo are called passistas.

Recife’s biggest claim to Carnival fame is Galo da Madrugada (Dawn Rooster), an early morning gathering of costumed partiers that begins at the break of dawn at 5:30 am on Saturday in Recife’s main square. Over 2 million people flood downtown Recife for this early morning party. Trios elétricos wind their way from Boa Viagem Beach, through neighborhood streets, and join the marching bands and percussionists to play music for the people. Recife thus becomes a huge dance party that involves everyone.

Olinda, located 6 kilometers from Recife, also hosts a Carnival celebration that is awash in popular cultural traditions. Given the proximity, it is easy to split your Carnival party time between Recife and Olinda. The beautiful city of Olinda is a UNESCO World Heritage Site and the party unfolds on its hilly cobblestone streets lined with colonial-era houses. Although lesser known than other parties, Carnival in Olinda is a real treat for culture-loving travelers because it is a more egalitarian event: everyone regardless of affiliation with a bloco can join in the parade.

Bonecos gigantes, or giant papier-mâché dolls, are one of the most photogenic features of Carnival in Olinda. They represent political figures, public intellectuals, and celebrities as well as original, invented characters.

Contact us to learn more about Brazil vacation packages and how you can organize travel to Salvador de Bahia or a tour to Recife & Olinda for Carnival!