Brazil’s jungle is a naturalist’s dreamscape, as it is home to the most known species of plants, fresh water fish, and mammals. 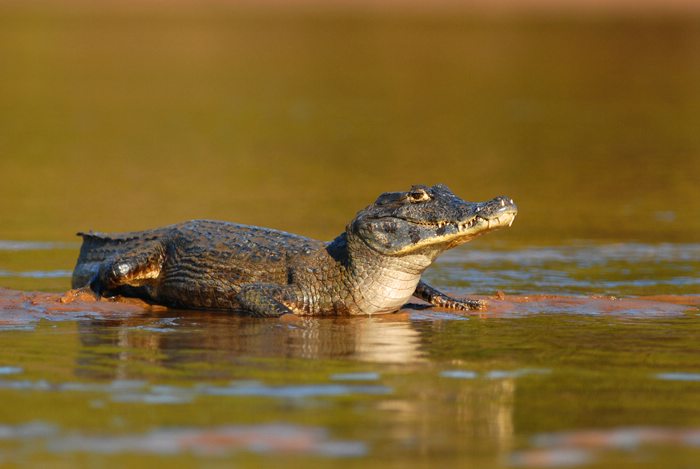 A Caiman sunbathing in Pantanal. Photo by Ana Castañeda

Brazil’s jungle is a naturalist’s dreamscape, as it is home to the most known species of plants, fresh water fish, and mammals. Look up in the sky and you’ll see the most number of bird species, look down and you’ll find the second most number of reptiles. For these reasons and more, Brazil is a top destination for jungle tourism.

On top of that, Brazil is one of the largest countries on earth making it rich with an abundance of everything. Most remarkable of all, a large portion of its national territory is comprised of the Amazon River basin meaning that Brazil is home to 60 percent of the Amazon Rainforest.

At Latin America for Less, we offer tour packages to Pantanal and Manaus, two of the most pristine and diverse destinations that Brazil’s rainforest has to offer.

Manaus
Pantanal
Staying safe and healthy in the Brazilian Amazon
Articles, Videos and More
Plan your own Brazilian jungle tour

The city of Manaus is the gateway to the Brazilian Amazon. It is situated at the confluence of the Negro and Solimoes rivers.  It has a perfect combination of cosmopolitan life– with its estimated 2 million inhabitants– and is bursting with authentic Amazon richness.

Visitors to Manaus typically visit the Jau National Park, which is the largest national park in Brazil, and all of Latin America.  With several thousand square miles of virgin Amazonian Rainforests, the park is an important ecological center due to its large number of endemic species and the richness of its wild flora and fauna.

Another great attraction in Manaus is the Meeting of the Waters. This is the confluence between the Rio Negro, with its dark (almost tea colored water), and the sandy-colored Solimoes River to form the Amazon River. The two distinct color waters run side by side for nearly four miles without mixing.

The weather in Manaus is typically tropical, but because it’s a rainforest it’s constantly wet. December through April are the wettest months, while July through September tend to be the driest.

An aerial view of the city of Manaus.
Photo by Ana Castañeda

The Pantanal wetland is considered the world’s largest and most diverse fresh water ecosystem. It can be found in southwestern Brazil and reaches into eastern Bolivia. Most visits to the Pantanal starts from the city of Cuiaba, the capital of the Matto Grosso state. This region has evolved into one of Brazil’s major tourist destinations for its wildlife.

When you go to Pantanal you are guaranteed to see a variety of different animals. During the dry season, families of caiman can be seen basking on the shores of every lagoon. The Pantanal is also home to a huge population of capybara and has a rich variety of birds, including endangered Hyacinth macaws. This region is also known as the best place in the Americas to spot Jaguars. The best time to see the elusive cat is between June and November.

In the wet season, the rains flood the Pantanal dramatically, which has prevented the growth of human development in the region.

Staying safe and healthy in the Brazilian Amazon

It is important to consider that the Yellow Fever vaccination is mandatory when traveling into Mato Grosso, and it’s recommended when visiting jungle regions. Mosquito-born diseases such as Dengue Fever are prevalent in the Pantanal during its rainy season (November to March) and it is advisable to wear long sleeve clothing and to apply protective insect repellent during the rains come.

In general, we suggest speaking with your doctor about vaccinations prior to embarking any trip to unfamiliar regions. Like with traveling to any part of the world, the rewards of seeing these scenic and unspoiled areas of the Amazon far outweigh the risks.

Plan your tour of the Brazilian Jungle

Ready for your Amazon and jungle adventure? Latin America For Less can organize your customized trip to Brazil; contact one of our expert travel advisors.

END_OF_DOCUMENT_TOKEN_TO_BE_REPLACED

There are countless angles of the majestic Iguazu Falls. Browse our gallery and you decide which face is better!