Unravel the Birdman Cult Mystery on an Easter Island Tour

Unravel the Easter Island Birdman Cult Mystery, a fascinating civilization that flourished in the 18th and 19th centuries untouched by mainland cultures. 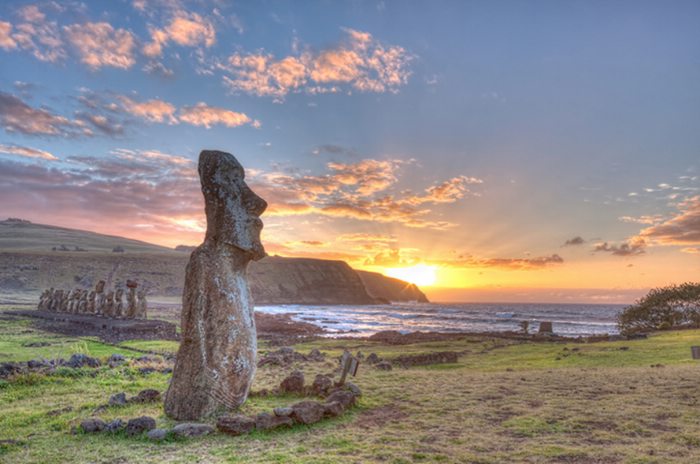 If you’re on an Easter Island tour and you peer over the edge of the jagged Rano Kau crater, the 2000-meter high extinct volcano on Easter Island’s northern coast, you’ll find the remnants of a stone-brick village of Orongo. This is the crux of the Rapi Nui, or Easter Island Birdman cult, a fascinating civilization that flourished in the 18th and 19th centuries untouched by mainland cultures.

The Rapi Nui islanders competed in a duathlon, swimming to the islet of Motu Nui and then running to Orongo, to bring back the first Sooty Tern egg. The first to bring the prize to the Orongo altar became the birdman for the year.

Easter Island was not thus named because of this elaborate egg hunt. The island, known to locals as Rapa Nui or Big Rapa, was so dubbed because the Dutch explorer, Jacob Roggeveen, landed on the island on Easter Sunday in 1722.

3700 km (2300 miles) off the coast of Chile, Easter Island was well-isolated from the mainland until the mid-1800s. Besides the Orongo Birdman ceremonial center, a number of fascinating landmarks tell of an utterly mysterious Pacific Islander culture.

The moais statues of Easter Island have become synonymous with mystery. These iconic, enigmatic statues stand guard in the Rano Raraku Quarry. There are over 300 of these monoliths, and some are in various stages of construction. One moai is over 70 feet tall. If you explore the Rano Raraku quarry, make sure to check out the crouching Tukuturi moai.

On an Easter Island tour, the sights of Easter Island will put you in a spell. Tour Hanga Roa, where you will see plenty of moais. Then head over to the eastern part of the island to see Ahu Tahai, where the moais bases were built to support the statues.

Also make sure to see Ahu Akahanga and Ahu Vaihu, where moais lie prone like toppled dominoes, a testament to the colonization that precipitated the downfall of this fascinating culture.

Another great activity to do on an Easter Island tour is scuba dive around Motu Nui, the legendary islet off the coast of Easter Island that the birdmen once swam to in search of the prized Sooty Tern eggs. Motu Nui boasts terrific snorkeling and scuba diving. The waters are clear and gentle. From the islet, you can glance back at the absolutely stunning edge of the Rano Kau crater.

February is a great time to visit Easter Island, as the ten day festival of Tapati Rapa Nui is celebrated in February. The peak season is January to March. Coldest months are July and August, but if you plan your Easter Island tour during this time, you will have the island nearly to yourself. Contact an expert to help plan a customized trip to Easter Island.