Colonia del Sacramento in Uruguay is just a short ferry ride from Buenos Aires. Read more to learn about this day trip from Argentina's capital! 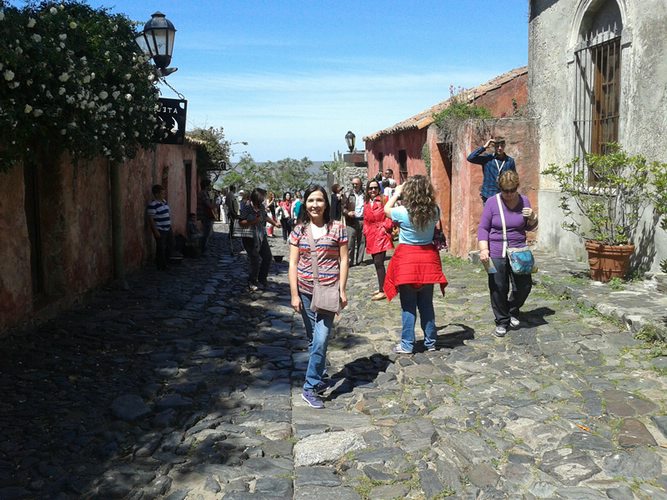 Heidy enjoying the quaint streets of Colonia de Sacramento in Uruguay, not far from Buenos Aires.

Argentina’s capital city of Buenos Aires is packed with cultural and culinary attractions, from Watching tango, witnessing the city’s frenetic soccer energy and cruising the local markets of San Telmo. But it was the unexpected charm of Colonia de Sacramento, a town in Uruguay accessible from Buenos Aires, that is the highlight of many peoples’ trips. Learn more about this little town and why more people should consider an excursion to Colonia during their visit to Buenos Aires.

How to Get There

A day trip to Colonia de Sacramento offers a nice escape from the fast pace of city life. Buenos Aires is a beautiful city but it’s large and hectic, while the small town of Colonia is nice and peaceful.

Travelers take a ferry from the Puerto Madero Waterfront in Buenos Aires for a straight shot across Rio de La Plata to Uruguay. While some travelers may think going through customs would be a hassle to spend just the day in Colonia, it’s actually a quite convenient process – just remember to bring your passport!

Buquebus is one of the principal companies that offers ferry service between Argentina and Uruguay.

First you’ll head through an immigration check at the ferry terminal in Buenos Aires and then board the boat. Busquebus is very modern and comfortable. There is even an area where you can buy snacks. After departure it’s just a 50 minute ride to Colonia.

If you take the fast ferry option that delivers ytou to Uruguay by mid-morning you’ll have all day to explore Colonia’s sites and cobbled streets before boarding a return crossing in the afternoon. Otherwise, the town is well worth an overnight stay of a day or two.

The city was founded in 1860 by the Portuguese Manuel Lobo but its strategic location would make it the reason of conflict between Portugal and Spain for the next century. The colony changed hands between the two colonial powers an incredible seven times until finally on January 10, 1809 the city of Colonia de Sacramento became part of Uruguay. The city’s well-preserved landscape pays tribute to both the Portuguese with its style of houses and Spanish with its ample cobblestoned streets.

The popular Barrio Historico (historic quarter), named a UNESCO World Heritage Site in 1995, has become a major tourist attraction especially for visitors arriving from Buenos Aires, through the frequent ferry service across the Rio de la Plata between the two cities.

The waters of Rio de La Plata provide locals and visitors with relief from the heat.

The main attractions in Colonia del Sacramento lie within the Plaza Mayor where travelers will find the Porton de Campo. The drawbridge was built in 1745 as way to safeguard the walled city as the only entrance. The bridge has been restored with thick fortified walls and tile and stucco buildings. The iconic lighthouse, El Faro, was constructed in 1857 from the ruins of the Convent of San Francisco where travelers can now walk to the top and see the entire city along with the Rio del Plata. We recommend being there just before sunset!

There are also several museums such as the Museo Portugues, Museo Espanol and Museo Municipal which all provide insight into the city’s past. Another notable attraction is the Basilica of the Holy Sacrament which was built of stone by the Portuguese in 1808. Finally, just outside the city lies the Plaza de Toros which was built in 1910 and hosted only a handful of bullfights in its time before bullfighting became prohibited in 1912.

Colonia del Sacramento has become the primary destination on many Uruguay tours, and the city’s rise in tourism can be attributed to its excellent restaurants by the river, the unique art and craft shops, museums and the large yacht harbor. Tourists and Buenos Aires residents flock to Colonia’s waterfront during the summer months from December to March when high temperatures are matched with high humidity. Here people can cool off in the waters of Rio de La Plata, lounge in the soft sandy beaches and enjoy a wide variety of water sports. The city can easily be walked in a single day with travelers often departing to Montevideo late in the afternoon. There are many shops and boutiques which rent out bicycles and scooters for those interested in riding around the city or exploring the beautiful countryside.

Colonia del Sacramento takes travelers back into the 17th century through its fascinating landscape. The city has become incredibly popular because of its accessibility and its convenient location. It may not be the most extravagant of man-made wonders but it promises to leave travelers pleasantly surprised.

Heidy enjoys some yerba mate, a common drink enjoyed in Uruguay and Argentina.
All photos courtesy of Heidy A./Latin America For Less

Often referred to as the “Paris of the Americas,” Buenos Aires boasts an eclectic mix of European and South American influences that make it a must-see on any trip to Argentina.