Learn why the world's largest site for dinosaur tracks in Bolivia exist on a steep vertical wall. 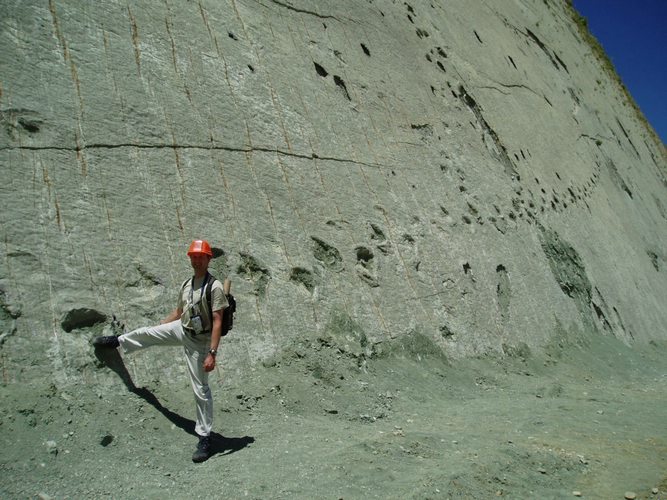 Take a step back in time with these dinosaur tracks that scale a vertical wall. Photo from yatlik.com

The Cretaceous Park in Bolivia offers visitors an insightful dose of prehistoric history. On a visit to the Park you can see life-size replicas of dinosaurs and examine more than 5,000 individual footprints, making it the largest site for dinosaur tracks in the world. But the fact that these footprints are sprinkled on a steep vertical wall leaves many visitors wondering how they ever got there.

Unraveling the mystery
Visit the world’s largest site for dinosaur tracks
Photos, videos and more
Customize your own tour to Bolivia

Some 68 million years ago dinosaurs tramped across a muddy landscape that hardened during a period of drought. The dinosaur footprints that dried during the prolonged heat were then sealed under a fresh layer of mud and sediment when the rains returned. Over time these wet-to-dry changes in the climate formed several thick series of limestone and kept the dinosaur tracks in a state of excellent preservation.

The dinosaurs that once lived in South America did not defy the laws of gravity, nor were they excellent climbers. So, how did these dinosaur tracks end up on a large vertical limestone wall? Plate tectonics provides a geological explanation to this question, and slowly rotated and pushed up the rock wall to an impressive 72 degree angle that exists today. This rock wall was exposed millions of year later in 1994 during the course of excavation at a limestone quarry near Sucre, Bolivia, thus revealing these vertical dinosaur tracks.

This site is regarded as the best discovery of dinosaur footprints in the world. Paleontologists have identified 462 distinct tracks from at least 8 different species of dinosaurs, which provide useful information about these ancient creatures. The size of each dinosaur, for example, can be discerned from the size, depth and the distance between each set of footprints. These tracks also reveal interesting dinosaur behavior, such as the claw prints of a tyrannosaurus chasing its prey.

A trip to Cretaceous Park begins with a walk among several life-size models of dinosaurs that’s narrated from hidden speakers that play the sounds these ancient creatures may have made. Visitors can take a guided tour offered in Spanish or English and then check out the dinosaur tracks from a viewing platform. Using a set of binoculars, visitors can scan the large limestone wall measuring 4,800 feet long and 352 feet high for a look at these old footprints.

Cretaceous Park is located about 3 miles from the main plaza of Sucre in the direction of Cochabamba.  To get there you can take a taxi, local bus, or arrange transportation on a Dino Bus that depart daily from outside the cathedral in Sucre.

For a unique look back at Bolivia more than 68 million years ago, trace the dinosaur footprints at Cretaceous Park and get a taste of what paleontologists describe as the richest find of tracks in the entire world.

Customize your own tour to Bolivia

Let a travel advisor at Latin America For Less help you discover the magic of Bolivia.  Check out our tour packages or contact us to start planning your own trip!

END_OF_DOCUMENT_TOKEN_TO_BE_REPLACED

El Teleferico, which opened at the end of May, will shuttle 500,000 passengers between La Paz and El Alto daily.