Food, music, dance, architecture, and history – culture-loving travelers will find all these things in abundance on a Salvador de Bahia tour 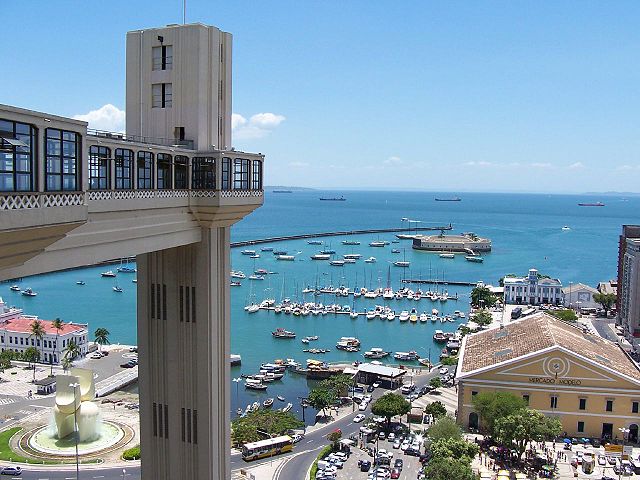 Elevador Lacerda, built in 1873, connects the lower and upper sectors of the city. The port and the Mercado Modelo are in the background. Travelers can visit the market’s underground tunnels, which are said to be haunted by slaves who were held in chains during the slave trade.

Food, music, dance, architecture, and history – culture-loving travelers will find all these things in abundance on a Salvador de Bahia tour. In this city, African, European, and modern international influences weave together into a rich tapestry that is resplendently Brazilian.

Salvador de Bahia has always had an important place in Brazilian history. The first Portuguese sailors and settlers to colonize the coast in the early 16th century made this town into the capital of colonial Brazil. Salvador served as a sea port and as the center of the sugar industry and the African slave trade for the Portuguese Empire. The capital was moved to Rio de Janeiro in 1763, but at the time of the American Revolution, Salvador was one of the largest cities in the New World.

Visitors to Salvador de Bahia today will find a vibrant city, one of the wealthiest and most populous in Brazil. The city’s history as a center of political and economic power, as well as its role in the slave trade, still give shape to Salvador’s present. The African influence in particular is visible everywhere – in food, music, religion, and celebrations – to the extent that the city is indisputably considered the epicenter of Afro-Brazilian culture.

Pelourinho in Salvador de Bahia was declared a UNESCO World Heritage Site in 1985.

Visitors to Pelourinho, the historical center of Salvador, will find examples of colonial architectural jewels that act as reminders that, after Lisbon, this was once the most important city in the Portuguese Empire. The square and surrounding cobblestoned streets are filled with former administrative palaces, restored mansions, and gold-ornamented churches. The district was named after the numerous pillories, or wooden posts, that were erected in the public square and where escaped slaves and other criminals were tied to receive public lashings.

Carnival in Salvador de Bahia is one of the best in Brazil, almost rivaling the world-famous Rio de Janeiro carnival. Salvador’s celebration distinguishes itself for its emphasis on music and the scale of its street festivals. Trucks known as “trio elétricos,” measuring over 60-feet in length trucks, are equipped with booming sound systems and carry dancers, musicians, and singers through circuits that traverse 15.5 miles (25 kilometers) through Salvador’s neighborhoods. Artists perform samba, but also afoxé, a folkloric music and dance that reflect the region’s African traditions in rhythm and dress.

The Bahian Carnival surges through Salvador’s streets in a mass celebration.

Salvador’s West African roots are also visible in various other cultural practices. Capoeira, a martial art with roots in the 16th century that combines music and dance, is practiced in public spaces all over Brazil, but Salvador boasts some of the original modern schools.

Candomblé is a religion with roots in present-day Nigeria. Faced with forcible conversion to Catholicism, enslaved Africans maintained their religious practices by adapting them to Catholic ones. Worship of native deities, known as orixás, continued under the guise of devotion to Catholic saints.

Finally, Bahian cuisine also features a heavy African influence. For example, many dishes use azeite-de-dende, or palm tree oil, as a base ingredient particularly with seafood.

Brazil will host the 2014 FIFA World Cup and the 2016 Olympic Games, both of which will have venues in Salvador de Bahia. Find more excuses to visit this and other Brazil destinations by visiting our Latin America For Less page.