Discover the magic of Chiloé in Chile

Chiloé is a magical archipelago, located 1000 km (600 miles) south of Santiago, with a wholly unique cultural heritage that sets it apart. 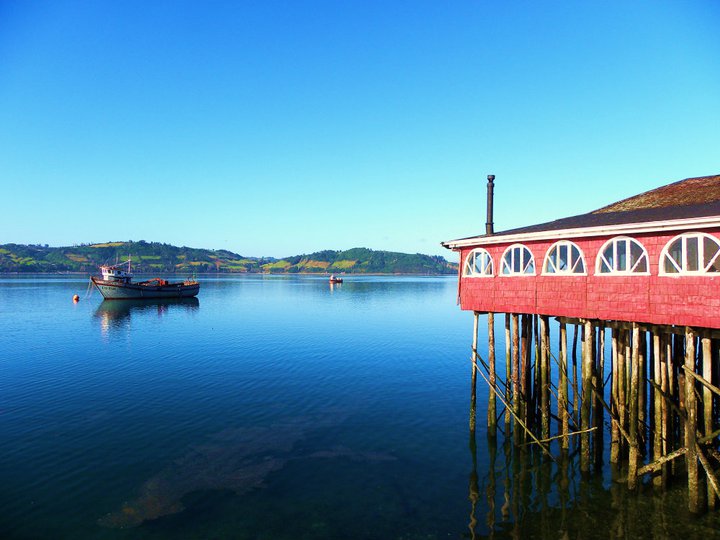 Built on piles extending over the water, palafitos allow residents to maximize access to the sea. These houses can be found in cities of Castro, Ancud, Quemchi, and Conchi.

Chiloé is magical. This archipelago, located 1000 km (600 miles) south of the capital Santiago, boasts a wholly unique cultural heritage that sets it apart from other Chile vacation destinations. Many groups have settled the islands: indigenous Huilliches, Cuncos, and Chonos, Spanish conquistadors in the 16th century, and European immigrants in the 19th century intermingled to create a mestizo legacy most evident in Chiloé’s unique architecture and mythology. Travelers who love history, culture, and the outdoors will find Chiloé to be the perfect destination for a Chile tour.

Matt, expert Chile travel advisor, recommends stopping for lunch or spending the night at Hostelomera, a hostel that makes up for chilly Chiloé nights with a warm and welcoming environment.

Matt Noonan, travel advisor at Latin America For Less, had the opportunity to visit Chiloé and says, “it is one of the more fun places I’ve visited,” adding that “the landscapes are just fantastic.” The above photo and the ones that follow are courtesy of Matt and illustrate his opinions of Chiloé in spectacular fashion.

Among Matt’s Chiloé travel tips: Go to Castro, the perfect base for further exploration. Try the great food, “any sort of seafood, curanto, and milcao.” And bring a raincoat. Also, look out for the work of Juan Pablo Mutay, a street artist whose murals really capture the spirit of Chiloé. Mutay painted Hostelomera, pictured above, and his work can be found throughout the country of Chile.

Castro, founded in 1567, is one of the oldest cities in Chile and an ideal base for Chiloé tours.

Chiloé is hilly and rainy. The islands of the archipelago are part of the Chilean Coastal Range, separated from the mainland by two gulfs, Ancud and Corcovado, where blue whales like to hang out. Look at a map of Chiloé and you’ll see that the coast that faces toward the mainland is sinuous. The many inlets, natural bays, and points were all carved by ancient glacial action. Most of the human population is concentrated on the eastern shores of Isla Grande, the 2nd largest island in Chile, where the winds are not as whipping, rainfall is less, and the soils are more suited for agriculture.

The singular architecture of Chiloé is also an adaptation to these conditions. You will see wooden structures everywhere. Houses are sheathed in wooden shingles carved from the native alerce tree, which is especially resistant to the high humidity of this coastal climate. The shingles are painted in vibrant colors and have unique shapes and designs such as diagonals, curves, and tessellations. You’ll also see palafitos, or stilt houses, extending over the waters of the coastal cities. According to Matt, these “quirky things are probably the most picturesque part of Chilote towns.”

The churches of Chiloé are perhaps the most outstanding of the archipelago’s wood-worked treasures, 16 of which have been declared UNESCO World Heritage Sites. Exteriors are characterized by pitched roofs, entrance porticos with columns or arches, and multi-storied towers in hexagonal or octagonal shapes that reduce wind resistance. The interior of the churches are elegant, with intricate details and ornamentation that reflect the rich spirituality of Chilote culture.

Another of Chiloé’s main attractions is its mythology, a set of superstitions and legends which are an amalgam of indigenous and Western religious beliefs. When forces of nature such as wind, rain, and sea have such a strong presence, it is no wonder that these have shaped the cultural landscape of Chiloé. Many people still believe in witches and wizards and spirits that can take the form of humans, animals, or inanimate objects. Mythical figures include: el trauco, an ugly dwarf that seduces virgins; la pincoya, a gorgeous goddess of the sea whose appearance augurs either the scarcity or the abundance of food; and el calhueche, a ghost ship that enchants unfortunates with sounds of music and revelry.

Chiloé can be accessed via Puerto Montt and is a great addition to a Puerto Varas tour.

For more information, please contact one of our expert travel advisors at Latin America For Less who can help you plan a visit to magical Chiloé and other must-see destinations in Chile.