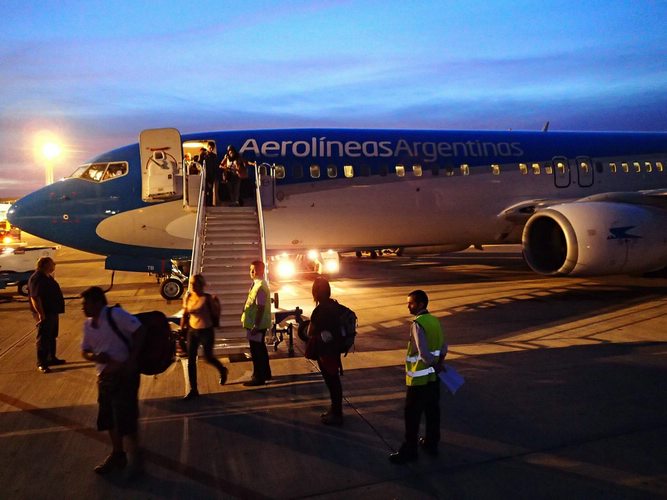 Are you gearing up for your trip of a lifetime to explore the beautiful country of Argentina? Argentina is known for its rich history, numerous natural wonders, and enchanting ambiance, from the tropical cascading falls of Iguazu to the centuries-old vineyards of Mendoza.

Before you start the adventure, it is a good idea to consider how to get from one popular Argentine destination to another. When traveling within Argentina, the fastest mode of transportation is by plane, however, some travelers opt to explore by bus. The bus will definitely save some money, but at the sacrifice of time. While the roads and highway networks of Argentina are well-developed, distances are long; sometimes taking more than 15 hours to travel between destinations. If your travel plans have you on a tight schedule, it is better to take a domestic flight. Read on to learn more about domestic flights in Argentina.

Domestic flights are run daily by two main airlines: Aerolineas Argentinas and LATAM Argentina. All flights pass through airports in Buenos Aires, either Jorge Newbery Airfield or Ezeiza International Airport, depending on the size of the aircraft.

LATAM Argentina, on the other hand, is a Chilean airline which was formed in the 1930s as a state-owned flight service. Later in 1989, the Chilean government privatized its airline industry and the company expanded to provide international service to destinations all over the world. Today, LATAM Argentina offers domestic flights to 18 destinations.

Both  of these airlines operate domestic flights to Argentina’s most popular destinations, but Aerolineas Argentinas serves nearly twice as many cities.

Flights are roughly the same price for round trip tickets, but LATAM Argentina is a little more flexible in terms of changing your ticket or cancellations. LATAM Argentina also is generally a more punctual airline.

Both LATAM Argentina and Aerolineas Argentinas offer daily flights to the following destinations:

When planning your domestic flights in Argentina, take a look at the following sites for some more useful information:

Information on airports in Argentina

Plan you own adventure to Argentina

Contact us now to speak with an experienced travel advisor to help you decide which flight option is best for you.