Exploring the mystery and history of Easter Island

Take a trip to Chile, and visit the sights of Santiago before setting off on a flight to one of the most mysteriously beautiful places in the World, Easter Island. 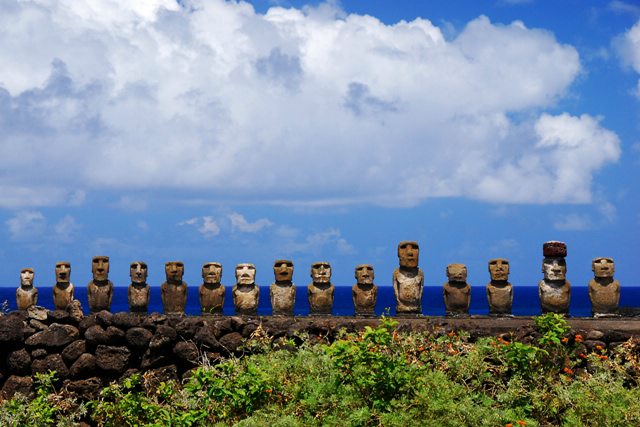 South America provides a wide variety of natural and historical wonders, providing the perfect destination for any traveler. Take a trip to Chile, and visit the sights of Santiago before setting off on a flight to one of the most mysteriously beautiful places in the World, Easter Island.

Travel to Easter Island, originally named Rapu Nui, which can be found 2,300 miles (3,700km) off the coast of Chile in the South Pacific Ocean. Formed by a series of volcanic eruptions, Easter Island is only 14 miles long and 7 miles wide; however this small secluded island holds an immense history and great mystery.

The history of Easter Island is one of intrigue and devastation. Activity on the island dates back to around 300 A.D. Original settlers of Rapu Nui lived in peace on this small island; however scarcity of resources led islanders to a civil war in 1680 and diminished the island’s population. Upon arrival to the island in 1722, Dutch explorer Jacob Roggeveen renamed the island Easter Island because of the expedition’s arrival on Easter Sunday. The Dutch were the first European visitors to the island and marked the beginning of exploration by the outside world.

In 1770, an estimated 3,000 people inhabited the island. Only four years later, the island’s population was again found reduced to a mere 700 people, less than thirty of which were women. The population of the island began to rebuild itself, only to be devastated once again with the slave trade from Peru in 1862 as well as an array of diseases. By 1877, only 111 people were found on the island.

Despite its past the island has again rebuilt its population and was named a UNESCO World Heritage Site in 1995, marking it a cultural and historical site which should be honored and preserved for future generations, and a unique destination on any trip to Chile.

Although the island has a somber yet interesting history its true appeal comes in the form of statues. Over 900 moai, a statue that is crafted from volcanic stone, cover the island. The moai were crafted by the original inhabitants of the island. Like a snowflake, each statue is unique and their purpose is still unknown.

The statues are a great cultural mystery: they are speculated to represent ancestors who watch over the island. Scattered over the slopes of the island, the statues average 13 feet in height with an average weight of 13 tons and are a true symbol of the masterful craftsmanship of the island’s original inhabitants. The moai were also meant to sit on ahus, or shrines, which were raised off the ground and often held tombs beneath. The ahu can be seen mostly on the coast, moai occupy some of these, but years of war and natural disasters have left many empty. The mystery and beauty of the moai statues bring travelers from all over the world to Easter Island.

Those wanting to explore Easter Island’s history and mystery can take a guided tour of Easter Island on your trip to Chile to see some of the most impressive of Moai. Many visitors will stop at the Rano Raraku quarry, the birthplace of the moai, where these mysterious statues were created by hand. At the quarry visitors will see over 300 unfinished statues, all in different stages of completion. The Ahu Vaihu and Ahu Akahanga are sites in which travelers will be reminded of the island’s dark past as many moai are toppled like dominoes, a result of war and colonization. Another must-see is the Ahu Tahai where the ceremonial bases or ahus, were constructed. Travelers can investigate the island’s terrain independently and discover the deep history and story behind each moai.

Watch the sunset over the moai during your trip to Easter Island.

An island larger in history and culture than in actual size, Easter Island is a history lover’s paradise. A trip to Easter Island is a great complement to any Chile vacation. Contact our team of experts and start planning your trip to Chile today.