The Best Museums in Buenos Aires

July is a great time to visit Buenos Aires, the weather might be chilly, but the city heats up with a myriad of concerts, festivals, and exhibitions. 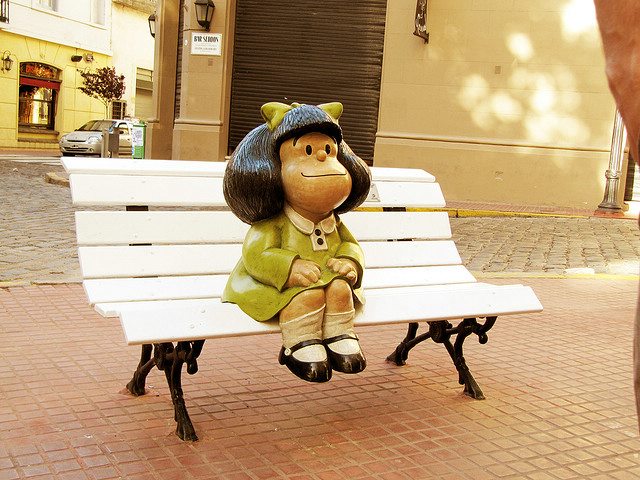 Mafalda, an iconic Argentine cartoon character by the graphic artist Quino, sits on a bench in front of Quino’s childhood home in San Telmo, a bohemian neighborhood ideal for both guided tours and independent exploration.

July is a great time to visit Buenos Aires, the “Paris of the South.” The weather might be chilly, but the city heats up with a myriad of concerts, festivals, and exhibitions. Throughout the month of July, the Ministry of Tourism and Culture will be offering free tours to historical and cultural sites around Buenos Aires, a perfect addition to an Argentina travel itinerary.

Buenos Aires is abuzz with the opening of La Usina del Arte, a great addition to any Buenos Aires tour itinerary.

It is said that in the early 20th century, cartoonists flocked to Buenos Aires in the same way writers did to Paris. Museo de Humor (MUHU) is another new museum that pays homage to the long tradition of graphic humor in Argentina, with works by more than 150 Argentine and international artists.  MUHU was recently inaugurated in June 2012, with a 10 meter statue of Mafalda, Argentina’s most recognizable cartoon figure, standing by the entrance.

The museum is housed in the Edificio de la Cerveceria Munich, a historic building that was once a brewery, restaurant, and gathering place where notable figures such as Pablo Neruda would go to socialize. On weekends, visitors can partake in “Afternoons of music, tea, and beer” at La Munich, featuring musicians playing classical music as well as traditional tangos and milongas. On Tuesday and Thursday afternoons, the guided tour “De la Mujer al Humor” takes visitors on a walk through the trendy, revitalized Puerto Madero neighborhood, ending at MUHU.

Mafalda, an iconic Argentine cartoon character by the graphic artist Quino, sits on a bench in front of Quino’s childhood home in San Telmo, a bohemian neighborhood ideal for both guided tours and independent exploration on an Argentina vacation.

The city’s many other museums and cultural events will similarly be offering guided visits, workshops, and cultural programs. For example, in addition to their regular exhibits, the Museo Casa Carlos Gardel will be offering tango classes, and the Museo de Arte Hispanoamericano will be hosting performances of baroque music.

For a full schedule of cultural events in July 2012 and beyond, see the Buenos Aires Agenda Cultural (English and Spanish): http://agendacultural.buenosaires.gob.ar/.

And for more travel ideas, visit our Argentina For Less website or contact a travel advisor to start planning your fully customized Argentina vacation.