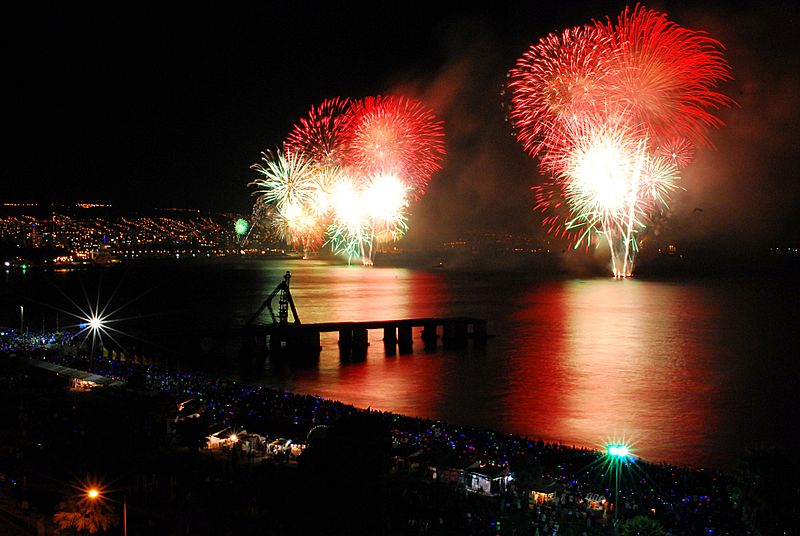 Choosing where to spend New Year’s Eve is a major decision for most people, especially if you’re looking to celebrate it overseas. South America has steadily become a popular New Year’s destination because of its warm climate and electric party scene. Check out some of our choices for the best Latin America destinations to spend  New Year’s Eve.

How does dressing in all-white and being a part of the ‘The World’s Greatest Party’ on Copacabana beach sound? Well for over two million people, locals and travelers alike, the idea of spending New Year’s Eve in Rio de Janeiro sounds like a dream come true. The New Year’s celebrations in Rio, concentrated on the Copacabana beach, are by far the biggest and most popular in all of South America. Brazilians often say, “God made the world in six days and on the seventh he created Rio de Janeiro.” The Copacabana stretch pays tribute to this, built on a narrow strip of land between mountain and sea its holds some of the most stylish shops, restaurants and nightclubs in all of Brazil; the perfect setting to come up with New Year’s resolutions.

Rio’s New Year festivities are second only to their Carnival celebrations which are held in late February and for both events you can expect the city to be buzzing until the early hours of the morning. Rio’s New Year is  however more than just partying; Brazilians are highly spiritual in their celebrations, a large majority of the crowd will be dressed in white as a way of paying tribute to the goddess of the sea.

Celebrating New Years in true ‘Carioca’ style means an incredible amount of Samba dancing all across the beach and perhaps even some jumping of Copacabana waves later on in the evening. Once midnight strikes, be prepared for  some of the biggest and most colorful fireworks you’ll ever experience. Take it all in because there is no feeling quite like it as enviable eyes from all around the the world will be watching you welcome the New Year in style.


Bring in a new year in Valparaiso, Chile

A popular alternative to New Year’s in Rio de Janeiro is the spectacular fireworks show along the coast of Valparaiso in Chile. Valparaiso is one of the country’s most historic towns and officially known as the Cultural Capital of Chile. Located 120 kilometers west from the capital, Santiago, Valparaiso or ‘Valpo’ is a city with a population of around 300, 000 tucked into the hills along the Pacific Ocean. The city has always been an important seaport and was a 19th century stopover for ships coming from the Atlantic to the Pacific Ocean.

New Year’s in Valparaiso is a three-day festival where millions of visitors descend to witness the famous fireworks display, the biggest in Latin America. Most travelers find accommodation along the coastline and hillsides where you can find panoramic views of the show.  As a way of ensuring that everyone gets to witness the spectacle, just prior to midnight all the lights from the city blocks are turned off. The fireworks come from about 15 different launching points from within Valparaiso and along the coast of Vina del Mar. The show concludes with famous cascade of Valparaiso, a waterfall of sparks which shower down onto the water.

The views are perhaps the most memorable part of the experience and need to be seen by everyone at least once in their lifetime. Musicians and performers from all around the world arrive to perform at the Plaza Sotomayer, where the party continues until around 8 a.m. The streets of Valpo are filled with people drinking and dancing, as the locals pride themselves in being some of the happiest and the most hospitable people in all of Chile.

Enjoy the fireworks, friendly faces, and diverse culture of Rio de Janeiro or Valparaiso during your South America vacation. To learn more about how to make your New Year’s Eve incredibly memorable contact one of our travel experts to create a customized travel package.