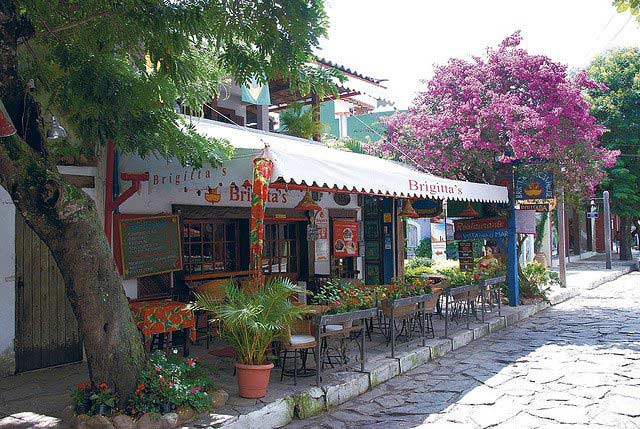 Buzios center is the perfect place to relax under the Brazilian sun.

In January 1964, French actress and sex symbol Brigitte Bardot traveled to Rio de Janeiro with her Brazilian paramour Bob Zagury. Fed up with the unrelenting pursuit of the paparazzi, the couple plotted an escape from Rio, sailed incognito up the coast on a yacht, and arrived to Búzios, which at the time was an isolated fishing village. They were accompanied by one select photographer, the Frenchman Denis Albanèse, who snapped the pictures of Bardot’s beach frolics that eventually put Búzios on the map as a world famous beach destination.

In the years that followed, Búzios became the go-to beach retreat for the rich and famous in South America and around the world. Mick Jagger and his entourage famously made an appearance in 1976, riding through Buzios’ dusty dirt roads in a black limousine.

Today, the dirt roads are paved, and visitors to Búzios on a Brazil vacation will find a world class sea resort that offers the best in boutique shopping, dining, fine arts, ecological attractions, and varied nightlife.  First class amenities set amidst a spectacular beach setting – not for nothing is this charming town known as the Brazilian Saint Tropez and listed among one of Brazil’s top beaches. In recognition of Bardot’s lasting influence, Búzios has a beachfront promenade, known as Orla Bardot, dedicated to the French actress, as well as a bronze statue, a theater, and a café or two.

The tranquil waters of Praia do Armacao with a slice of the Orla Bardot visible on the right.

For a vacation in Brazil’s tropical paradise, the key word is praia, which means beach in Portuguese, and the beach is certainly the main attraction on a Búzios tour. Located 105 miles (170 kilometers) northeast of Rio de Janeiro, the town is on a peninsula that juts out into the Atlantic Ocean. As a result of this geographical attribute, it has 5 miles of undulating coast formed into natural coves and stretches of semi-secluded beaches surrounded by Atlantic forest. Only a 2-hour drive from Rio, Búzios is the ideal weekend getaway to escape from the hustle and bustle of the big city.

A unique characteristic of Búzios beaches is that they receive equatorial currents from the north as well as Antarctic currents from the south. This means that beach-goers are sure to find something to suit their taste in one of the 20 beaches on the peninsula.

The north-facing beaches feature tranquil, crystalline warm waters, while those facing south have larger swells and colder waters. The colder, southern beaches have consistent wind and excellent conditions for surfing, kite surfing, windsurfing, parasailing, and jet skiing, whereas the gentler northern beaches are perfect for snorkeling and scuba diving.

Buzios has two dozen beaches, each with its own unique character and all of them worth a visit.

Among Búzios most popular beaches are Praia da Armação and Ossos, which bookend the center of town; Azeda, accessible via a short hike from the center; Ferradura and Ferradurinha, which offer clear and tranquil waters and swimming pool conditions ideal for kayaking and romantic beach picnics; João Fernandes, with an excellent offering of bars, seafood, and beach parties; and Geribá, which is the go-to spot for surfers and also the site of fabulous New Year’s Eve parties.

Multiple methods exist for exploring Búzios beaches. The quickest is a 3-hour tour in the open air trolley, which starts from the center of town and stops at the 12 of Búzios’ most beautiful beaches as well as 2 lookout points with panoramic views of the peninsula. Visitors with a bit more time to spare have the option taking a guided catamaran tour along the beaches and surrounding islands, with stops for swimming and diving.  Finally, for travelers with their own agenda, a water taxi departs from the main dock and, for about $1 USD per ride, shuttles passengers between the northern beaches.

The center of Búzios, with restaurants, shopping, and cultural offerings, is concentrated on a few streets within close proximity to coast. Rua das Pedras, or Stone Street, is the focal point of Buzios’ commerce during both the day and night hours. There are multiple areas, including cafés and tree-shaded benches, ideally suited for people-watching, meeting locals and fellow travelers, and strolling.

Buzios center is the perfect place to relax under the Brazilian sun.

Also in the center of Búzios is the previously mentioned Orla Bardot, which runs between the beaches of Canto and Armação. On this stretch of avenue lined with trees and dotted with gardens and benches, travelers can find the statue of Brigitte Bardot. Sculpted by the artist Christina Motta, the life-size bronze statue of the actress wears a blouse that models the now-ubiquitous Bardot neckline. She sits on her suitcase, sun hat dangling from one hand, and gazes into the distance, no doubt appreciating one of the countless beautiful sunsets that grace this scenic Brazilian town.

Brigitte’s statue on the Orla Bardot. Travelers pose for pictures while sitting on her knees, as a result of which they have become worn.

A visit to Búzios is a must as part of a Brazilian beach vacation To start planning your fully customized Brazil vacation, contact one of our expert travel advisors at Brazil For Less.