Learn about the exciting traditions celebrated during Holy Week in Costa Rica. 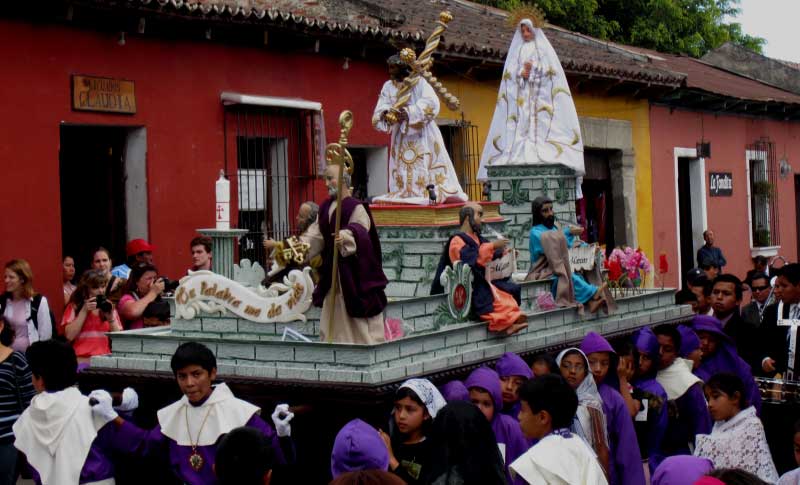 Semana Santa, or Easter Holy Week, is one of the most important Catholic festivities celebrated in countries throughout Latin America, and Costa Rica is no exception. Observed during the week leading up to Easter, Semana Santa honors the passing and resurrection of Jesus Christ.

During this time of the year Costa Ricans (or “Ticos“) get together with their loved ones and partake in religious celebrations. Catholic churches in every town organize masses and colorful processions, specifically on Palm Sunday, Holy Thursday, Good Friday and Easter Sunday. Easter Holy Week in Costa Rica is also an important time for family-oriented beach excursions.

A Costa Rica-style Semana Santa
Family time!
For the non-religious
A “dry” week
Superstitions are alive and well!

If you have a Costa Rican vacation planned during Semana Santa, you will be able to take part in and witness a week long celebration of traditions. Highlights include parades, religious processions, and small-scale festivals.

Semana Santa is celebrated during the last week of Lent (the forty days leading up to Easter). For many Ticos, Semana Santa is important as a time for worship and to honor their family members. Costa Rica is famous for the stunning processions that are organized during Easter Holy Week, in which Jesus Christ’s journey to the cross is re-enacted.

Semana Santa officially begins on Palm Sunday, which falls this year on April 13th. On this day, Ticos celebrate the entry of Jesus Christ into Jerusalem – one week before his death and resurrection. According to the Bible, Jesus was greeted by crowds waving palm branches when he entered Jerusalem, hence the name “Palm Sunday.”


Under the blazing Costa Rican sun, citizens celebrate Palm Sunday in the country’s capital city, San José, by marching between two close churches while holding palm leaves in their hands. Similar processions are held throughout the country. This event marks the start of Semana Santa, which concludes on Easter Sunday, one week later.

The celebration of Palm Sunday
Photo via Arguedas/AP

Celebrations continue on Holy Thursday, also referred to as Maundy Thursday, not surprisingly observed the Thursday before Easter. It commemorates the Last Supper, during which time Jesus enjoyed a passover meal with his disciples, one night prior to his crucifixion. On Holy Thursday many churches in Costa Rica hold special Communion services. Additionally, feet washing ceremonies are held to honor Jesus washing the feet of his disciples before the passover meal.

Until several years ago, vehicle traffic was strictly prohibited on Holy Thursday in Costa Rica. It was common to see people walk, ride horses, or just stay home.

Another important day during Semana Santa is Good Friday, celebrated the Friday before Easter Sunday. It marks the arrest, trial, crucifixion, death and burial of Jesus Christ. On this day, many Ticos fast, pray, repent, and meditate in honor of the suffering endured by Jesus on the cross. On Good Friday almost every Tico community marks the crucifixion of Jesus in some way or another. Many church services are held along with processions re-enacting Jesus’ final hours of life. In Cartago and in the Central valley, the Good Friday processions are especially elaborate, where a life-size statue of Jesus laying in burial clothes heads a procession through the streets as an act of veneration.

One of the most intriguing traditions to be a part of is in fact the dramatic procession of Jesus Christ to the cross, held on Good Friday. Some participants wear Roman soldier costumes, and others dress up as Jesus’ followers, who accompanied him in his journey towards death. The most popular characters seen in the procession are Jesus Christ, the Virgin Mary, angels, Mary Magdalene, Saint Joseph, and the apostles.

Interesting fact: the participants of the procession perform with the promise that they lived the past year without sin, and following the teachings of the Catholic church. The procession is extremely serious, and spectators fill the streets to pray and mourn. It is not uncommon for local TV stations to cover the events. The areas most famous for their Holy Week processions are San José, Heredia, and San Rafael de Oreamuno.

Due to the fact that Semana Santa is so important to Ticos, Holy Thursday and Good Friday are official holidays, and people get time of work.

This year Easter celebrations will be held on April 20th. Churches in Costa Rica usually organize a communion, or eucharist, service on Easter Sunday. After this service, Ticos break their fast and feasting is commenced. Church bells can be heard ringing through the streets.

One Costa Rican tradition is to eat seafood during the Holy Week, to comply with Catholic fasting and not consuming any meat on Fridays during Lent. The most popular dishes include rice and shrimp, ceviche, and fried fish. Desserts are also popular during this week. Most commonly empanadas, pudding and jelly are made from chiverre – a large squash that is in season during this time and similar in appearance to watermelon. The flesh of chiverre is placed in a large pot and cooked with blocks of brown sugar.

A delicious Chiverre
Photo via Miguevz/DeviantART

Not all Costa Ricans celebrate the religious aspect of Semana Santa! On the Thursday and Friday before Easter Sunday that Costa Ricans have free from work, they plan vacations to spend time with friends and family. During  Holy Week, Costa Ricans most often head to the beach for sun and relaxation.

The Costa Rican beach towns tend to become quite overcrowded during Semana Santa, and people make hotel bookings months in advance. Often the roads leading to the beach will be completely blocked with traffic. San José and other metropolitan areas often become deserted as schools, banks and government institutions are closed, sometimes the entire week.

If you are a tourist in Costa Rica during this time: do not worry! Since this is a popular time for visitors to the country, things run quite normally in the tourism industry.

During Semana Santa, a “Dry Law” is enforced in Costa Rica. This means that starting at midnight on Wednesday, all liquor stores and bars are closed. This is because Catholics are prohibited from drinking when mourning Jesus, until he resurrects on Sunday.

Even though a large majority of the Costa Rican population is indeed Catholic, it is common for families to stock up on alcoholic beverages, enough to last the entire week. At the beaches you may be able to find an open clandestine bar, but officially no alcohol can be sold.

Superstitions are alive and well!

Aside from having a drink or two, most Ticos respect religious traditions, and superstitions are alive and well. For example, often people refrain from swimming in the ocean on Holy Thursday and Friday because it is believed that God is angry and so there is the possibility that you may drown. The even more superstitious believe that a person will turn into a fish if they enter the water on Holy Friday.

Regardless of whether they are at home with family or vacationing at the beach, the people of Costa Rica have a great passion and respect for the celebration of Easter and Holy Week. If you intend to visit Costa Rica during Semana Santa, this will definitely be an unforgettable experience.

Semana Santa is a huge source of domestic tourism in South America and governments grant feriados largos (extended holidays) for this long weekend.

END_OF_DOCUMENT_TOKEN_TO_BE_REPLACED

Packing is an art! Here is a list of all the essentials you will need on your Costa Rica travel adventure.