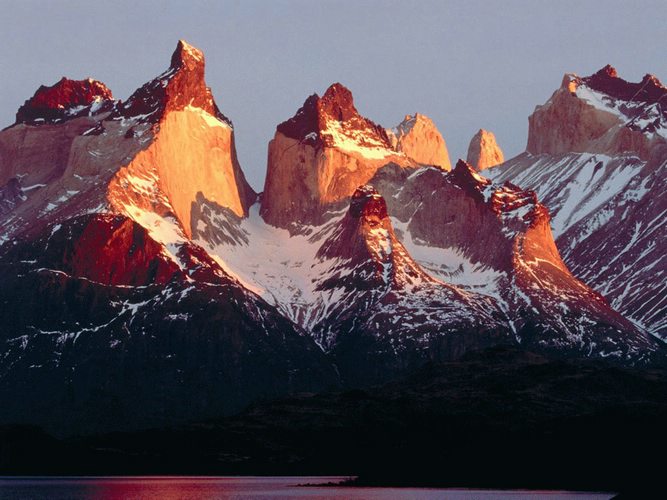 Bleak cold is the main feature of southern Patagonia during most of the year. At these extreme latitudes, icy conditions prevail. So much so that town officials in Punta Arenas (host to the largest regional airport with connections to Santiago) installed ropes and chains along the sidewalks to help pedestrians haul themselves forward in the face of lashing winds and rain.

Summer is different. From December to February, the austral days become long (up to 18 hours of daylight) and temperatures become friendlier, although the chance of sudden foul weather persists. During this time, travelers flock like migrating birds to Patagonia’s far southern reaches, hoping to have weather on their side as they explore vistas of unparalleled beauty.

From Punta Arenas it is 3 hours over land to Puerto Natales, the town that provides entrance to Torres del Paine National Park, a UNESCO World Biosphere Reserve since 1978. The reserve takes its name from the Cordillera del Paine, a clustering of mountain peaks located on 2,400 square kilometers of territory that sidles up to the border with Argentina.

The name of Torres del Paine National Park refers to three tower-like granite monoliths, one of the most visited attractions within the park.

An extensive and well-marked trail network connects the park’s valleys, glaciers, lakes, and rivers. Options for Torres Del Paine tours range from day-long outings with a return to a comfortable hotel in Puerto Natales to multi-day treks such as the famous ”W” Circuit with overnight stays at campsites and basic lodges in the national park. (For an idea of what to expect on a day tour, read about LAFL travel advisor Silvana’s trip to Torres del Paine.)

Whatever your travel style, Torres del Paine guarantees a feast for the eyes. Cameras can only begin to capture the magnificence of cerulean lakes, the panoramas of wide valleys speckled with flowers, the quiet force and mass of ancient glaciers, and the fine shading of sediments that settled into hard rock many eons ago, and that were then thrust into the air by earth’s tectonic movements and sculpted by glacial action into gorgeous forms that look like spires, needles, blades of swords, and tusks. This is scenery that fuels the imagination, a landscape that appeals to aesthetes and adventurers alike and that inspires both to plan a vacation in Chile.

For lovers of fauna, Torres del Paine does not disappoint. Guanacos, a cousin of the llama, happily roam on open grasslands, enjoying such protection that they’re almost indifferent to approaching humans. The rare ñandú (rhea) makes its home here and the elusive condor is known to make an appearance. Other bird species include hawks, harriers, owls, flamingos, swans, ibises, and woodpeckers. With such a display of nature at its finest, Torres del Paine earns its place as one of Chile and South America’s natural wonders.

Latin America For Less provides fully customized vacation packages to the most stunning destinations in Chile and across South America. Contact us to start planning your dream vacation.