Wine tourism in Brazil and Uruguay

Brazil and Uruguay are the 3rd and 4th largest producers of wine in South America. Tiny in comparison to the wine giants of Argentina and Chile. 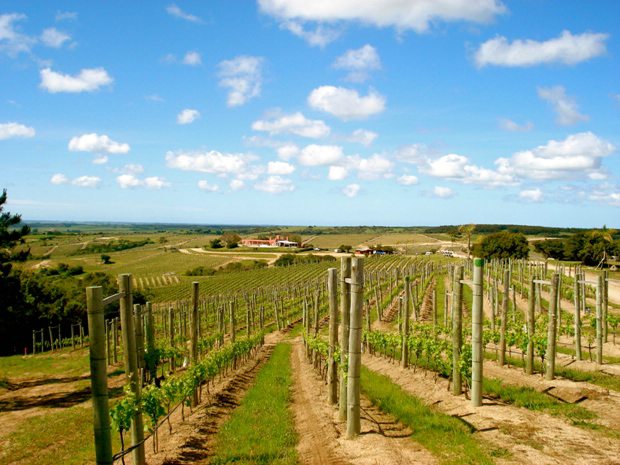 Uruguay boasts warm summers and cool winters. Humidity is high, and cooling ocean breezes create a grape-growing climate similar to that of Bordeaux.

In our continuing focus on wine, today we profile Brazil and Uruguay, respectively the 3rd and 4th largest producers of wine in South America. Brazil and Uruguay are tiny upstarts in comparison to the wine giants of Argentina and Chile, representing just a fraction of South America’s total wine production. The two countries are only just beginning to develop a global presence in the international wine world and to build their reputations as destinations for wine tourism in South America. However, a recent focus on producing fine wines, aided by careful vineyard management and an emphasis on boutique service, promises to put Uruguay and Brazil on the wine-making map in the next few years.

In Uruguay’s wine country, the town of Carmelo is a popular destination for wine tours departing from Buenos Aires. A giant bottle of Tannat has become an iconic photo op.

Uruguay, the smallest Spanish-speaking country by territory in South America, packs a big punch in the wine world. Approximately 21,000 acres (8,500 hectares) of vineyards are spread throughout the country and it ranks 4th in terms of wine production. With fewer financial resources and comparatively less marketing expertise than Argentina and Chile, Uruguay has focused on developing a niche market in Tannat, a bold, full-bodied red wine.

Uruguay has gained renown among wine lovers for its boutique wineries, which have been profiled by international publications such as The New York Times and The Telegraph. Wineries such as Bodega H. Stagnari, Narbona Estate, and Estancia Vik are all the result of small scale viticultural projects focused on two goals: producing quality wines for export and creating exceptional environments where wine enthusiasts can sample their best products.

Although international grapes such as Merlot, Chardonnay, Cabernet Sauvignon, and Sauvignon Blanc are also produced, Uruguay’s signature wine is Tannat. In European viticulture, this variety has historically been used in blends with Merlot, but tannat wines by themselves were mostly disdained because of their very tannic flavor. In Uruguay, grape growers have solved this problem by introducing new techniques to manage vines and by aging wines in new oak barrels.

Uruguay’s vineyards are concentrated around Montevideo, particularly in the bordering provinces of San Jose and Canelones, with a handful more around Colonia de Sacramento. An official wine trail, called Los Caminos del Vino, has been established north of Montevideo in Canelones. Wine-loving travelers on an Argentina vacation in Buenos Aires, will find that it is very convenient to take a day trip to Colonia or to arrange overnight stays in Montevideo.

Uruguay boasts warm summers and cool winters. Humidity is high, and cooling ocean breezes create a grape-growing climate similar to that of Bordeaux.

Brazil is more well-known for vines that snake through the tropical jungle rather than the vines that grow on a trellis. With the 2014 World Cup and the 2016 Summer Olympics fast approaching, Brazil is sprucing up all of its national attributes, including the wine industry. The largest country in South America is now ranked 3rd as a producer of the “drink of the gods” and is quickly gaining ground as a major exporter.

In recent years, and with an eye toward increasing both exports and domestic consumption, Brazil has distinguished itself for making very interesting wines, albeit in small batches. Varieties include Pinot Noir, Chardonnay, Merlot, Tannat and Moscato wines. Most South America wines tend to be strong, but Brazilian wines are fresh and fruity, with a moderate alcohol content and balanced acidity. These characteristics are precisely what make them very attractive to European palates.

Vineyards are nonexistent close to the equator, but the southern regions that border Argentina and Uruguay have been producing table wine for centuries. Over 1,000 wineries are concentrated in the south province of Rio Grande do Sul. Wineries such as Casa Valduga. renowned for its sparkling wines, form part of the region’s Caminho do Vinhos (Wine Path), where travelers can learn more about the history of the region and the wine-making process while visiting wineries and restaurants that showcase the best of Brazilian wines and gastronomy. Wine tourism promises to add yet another dimension to Brazil travel.

Aided by a government-led initiative to develop Brazilian wines for export, the wine industry has experienced phenomenal growth in the last decade.

Travel advisors at Latin America For Less are specialists in travel to top destinations in South America. Contact us to start planning your dream South America vacation package.